Ruins along the Inca trail

Trekkers of the Inca trail will pass by many impressive archaeological Inca ruins on the way to the ancient citadel of Machu Picchu. Many hikers are especially intrigued to observe the sunrise from Inti Punku on the morning of the fourth day, as the Inca’s may have done in their time.

Take your chance and book the Inca Trail

Inca ruins along the Inca Trail

The classic Inca Trail starts from Km 82, where the Qoriwayrachina ruins are located. The name Qoriwayrachina is Quechua for ‘Where the wind was used to refine gold’, and the site was recently discovered in 2001 by the Englishman Peter Frost. Most hikers do not enter Qoriwayrachina. However, there are some unique stone sculptures and altars.

The next site that you will come upon is the ruins of Llactapata, located at 2800 m above sea level. We think that Llactapata primarily used for crop plantations. Llactapata is a combination of two Quechua words, ‘llacta’ which means town and ‘pata’ means at height. (therefore, there are more sites with the name Llactapata). Not all trekkers take time to visit these ruins as they are situated far below the trail. 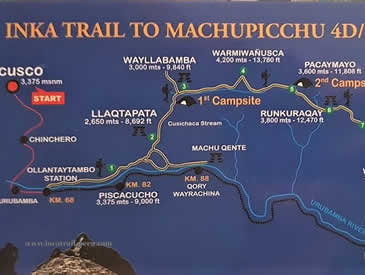 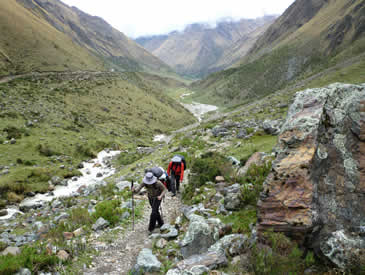 Although this is not an archaeological site as such, it is probably one of the most famous sites along the Inca Trail. The ‘Dead woman’s Pass’ or ‘Warmiwañusca’ in Quechua, is derived from what the pass looks like: a woman lying on her back. The pass is a breathtaking 4200 m above sea level, and it is the highest point on the trail. Once at the top, you will appreciate excellent views of the mountains Salkantay and Veronika. Most tour operators offer their campsite on the second day approx. 600 meters, below the Dead Woman's Pass, on the other side of the pass named Pacaymayu.

You will see the ruins of Runkurakay after the third pass on the third day: two concentric walls that enclose chambers and a courtyard. The walls are inclined and therefore seem to withstand earthquakes. Due to the construction of many sleeping quarters and stabling for pack animals, Runkaurakay was thought by archaeologists to have been a ‘tambo’: a resting place for couriers travelling to Machu Picchu.

Sayacmarca or ‘Inaccessible Town’ in Quechua, indeed seems rather inaccessible, due to the steep drops on three edges of the structure falling to the jungle below. To enter the ruins you need to climb 98 vertical stone steps along the edge of a mountain at the height of 3,600 meters above sea level! Not for the faint of heart!

After Sayacmarca, the vegetation along the Inca Trail begins to change as you reach the tropical cloud forest - part of the Amazon jungle in Peru - filled with colourful orchids exotic flowers. 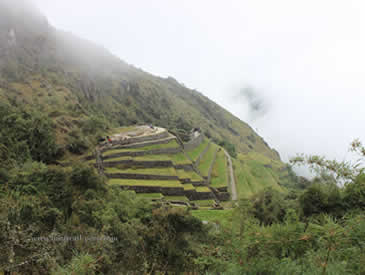 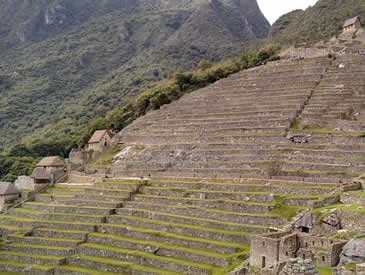 The Inca Tunnel is more of a feature rather than a ruin as such. You reach the Inca tunnel before the third pass, and you will see quickly why it is there: there is simply no other way to get further with this track due to the solid rock that is blocking the path! There is a raised causeway over a boggy area, a hewn tunnel and notches created in a cliff face to enable walking up its side. Incredible the Incas used such simple tools to create this 20-meter long tunnel. However, the method of carving such a structure is still a mystery!

Phuyupatamarca ( ‘the cloudy place’ in Quechua) can be reached by climbing down a long flight of stairs. This marvellous site contains six flowing fountains with Andean terraces and a pair of plazas including numerous buildings. Archaeologists think that Phuyupatamarca has housed hundreds of people at one time.

The name of Intipata was thought up by a recent expedition member. It means ‘Sunny Slope’, due to many terraces and the absence of plazas, religious structures or fortifications. Intipata is off the beaten track of the original Inca Trail, several hours from Machu Picchu. The location of the site makes us believe that it may have been strategically positioned here, to pass messages quickly to the mountain city of Machu Picchu. It also has a beneficial viewing point down to Choquesuysuy, and there are many lookout platforms throughout the ruins. 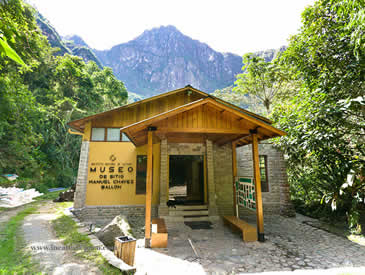 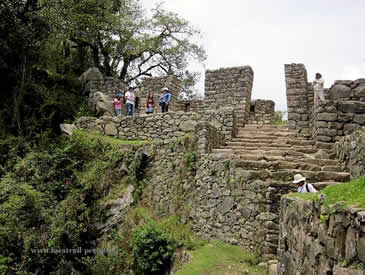 The name Wiñay Wayna (or ‘Forever Young’) was given due to the special Pink Orchid that grows in this area. Similar to Intipata, the structure was built upon a steep hillside and gives an advantageous view of the vulnerable access point along the Urubamba River.

Wiñay Wayna consists of good quality structures, such as finely carved stone buildings and a complex fountain and bath system, implying that it may have been a final cleansing post before the arrival to Machu Picchu.

Close to Wiñay Wayna, you can find a museum and garden with flora and fauna from this particular section of the Inca Trail, rivalling the best selection of orchids anywhere in the world.

The fourth and last day of the Inca trail starts before the break of dawn and goes to Inti Punku, also known as the sun gate at Machu Picchu. Inti Punku gives impressive views of the magical city of Machu Picchu, an unforgettable moment!