Compared to other areas: out of the 9000 known bird species, Europe and North America together have some 1400 species, whereas in Peru more than 1800 species are recorded! 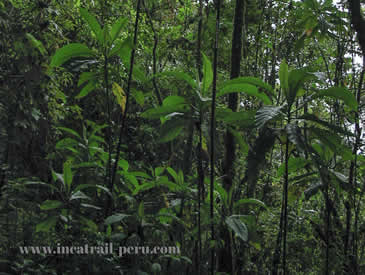 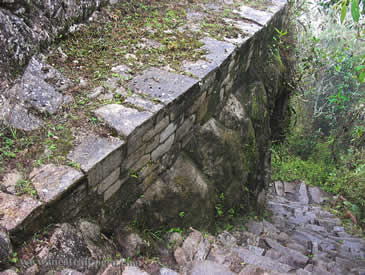 The Machu Picchu Sanctuary has such rich biodiversity due to a combination of factors.

First, the wide altitude range provides a great range of temperatures. In addition, the high mountain ridges create microclimates favourable to the evolution of certain species and subspecies. Finally, thanks to the ever-present rainfall of the Amazon Basin and the mist that creeps up the sheltered valleys, there is humidity year-round.

This bird can travel hundreds of kilometres and spend hours gliding majestically along canyon walls, or above hillsides looking for a carcass to feed himself. Condors have difficulty taking off after eating, due to the great weight taken on during the meal. Sometimes the Andean Condor can be seen around the Machu Picchu ruins but is more likely to be found at the higher parts of the Inca Trail. (Size 100 – 130cm; wingspan 300cm). 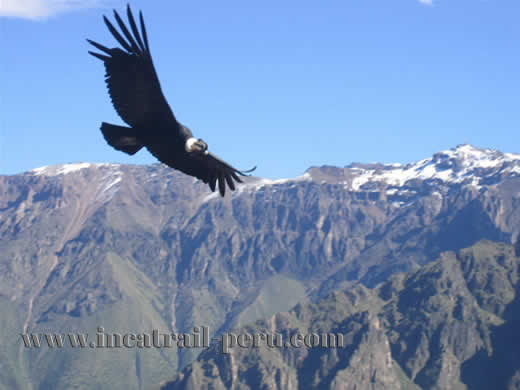 This bird is usually found in pairs or family groups and is especially seen around the town of Aguas Calientes. It is the only bird in the world that can dive and swim up the rapid white waters of rivers such as the Urubamba. (Size 36cm – 41cm). 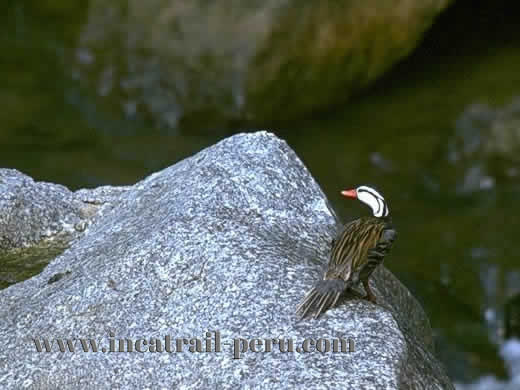 This is a very outgoing bird, which can be quite tame and has a distinctive bounding flight. It is thought to be an ornamental bird because of its bright yellow colour and pleasant singing. It is very common on the Inca Trail, around Llactapata ruins and along the railway to Machu Picchu. (Size 11 – 12 cm). 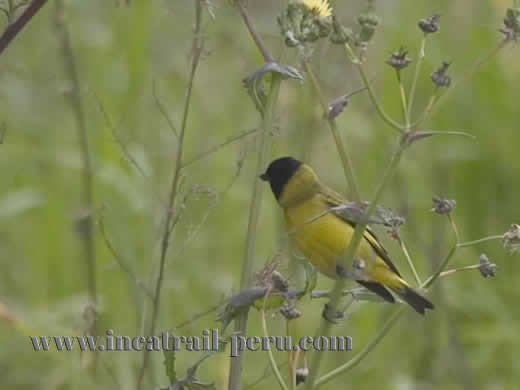 This active bird looks for its’ food at all levels of the forest. It is opportunistic and omnivorous and can be daring and curious at times. It is a very vocal bird that has a variety of loud calls. It is unmistakable with its blue head, greenback and yellow belly and can be seen along the railway tracks between Puente Ruinas and the Mandor Valley. (Size 29 – 32cm) 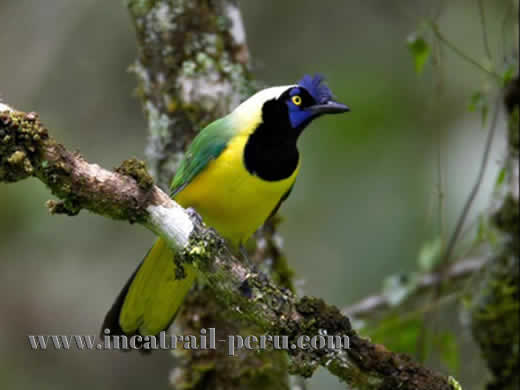 This bird is fairly common in the ruins of Machu Picchu and along the Inca Trail, and because it is reasonably tame and because it often perches out in the open, it is quite easy to see. It has a pretty, delicate song, and it is easy to pick with its speckled yellow belly and massive heavy beak. (Size 21-22cm) 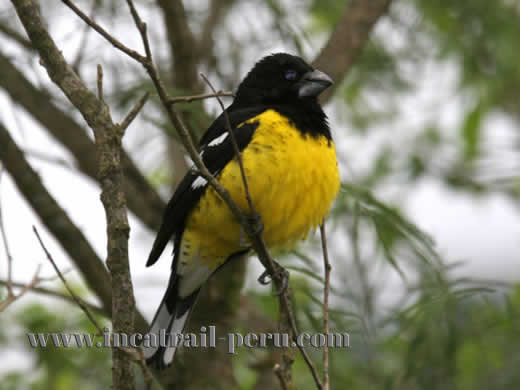 There are many Tanagers found in the Machu Picchu area, and this Tanager is active and conspicuous because of its blue and yellow colouring. You can see it along the Inca Trail. It can be a little aggressive, though when not disturbed it can be seen closely foraging from low levels to treetops. (Size 17-18cm) 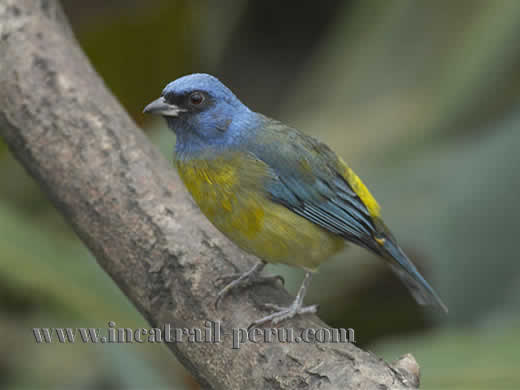 This is the biggest hummingbird in the world! It flies and hovers with slow, bat-like wing beats, slower than those of other hummingbirds. It is territorial and will chase other species away from its feeding site. It can be seen along the Inca Trail. (Size 19cm + beak 4cm) 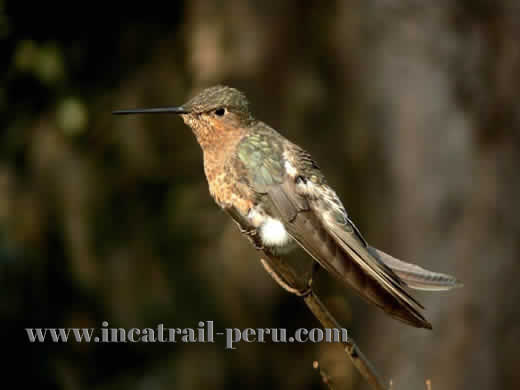 This is a fascinating looking bird with a short beak and a very long tail! It is active and aggressive and has a flight like other small hummingbirds, weaving and bee-like. It can be found anywhere along the Inca Trail. (Size 16cm + 1cm beak). 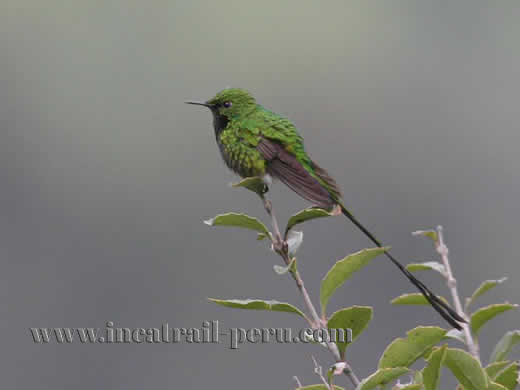 This tame bird is often seen along the roads and railway tracks in Aguas Calientes – it is conspicuous because of its’ rust-red colour. It will perch alert atop a bush or small tree. (Size 11 – 13cm) 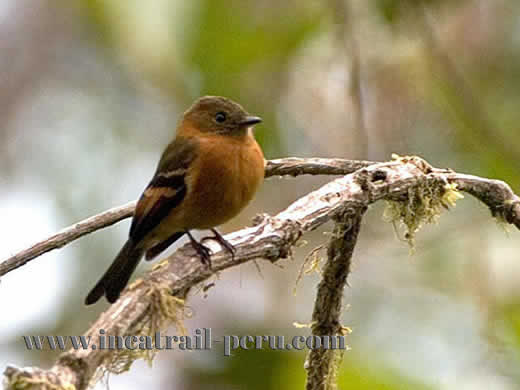 This bird can be seen along the Inca Trail – a wonderful sight because of its bright red and green colouring and long tail. It often perches upright for long periods without moving – meaning that when you see one you might have some time to observe it! (Size 25-26 cm). 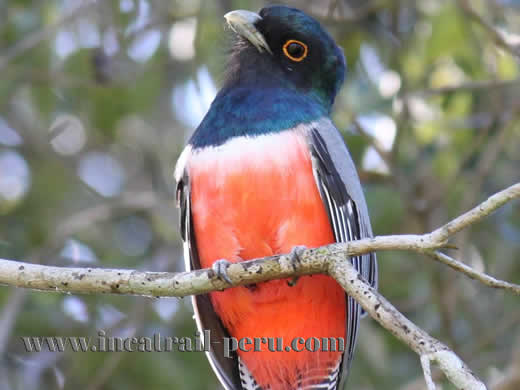 As Peru’s National Bird, this spectacular looking bird is often associated with Machu Picchu. It is shy and wary and prefers to stay in the trees feeding on fruits. The male Cock-of-the-rock is famous for its courtship displays early in the morning where two males will face each other, bowing, jumping and snapping their beaks to get the attention of a female. (Size 31cm) 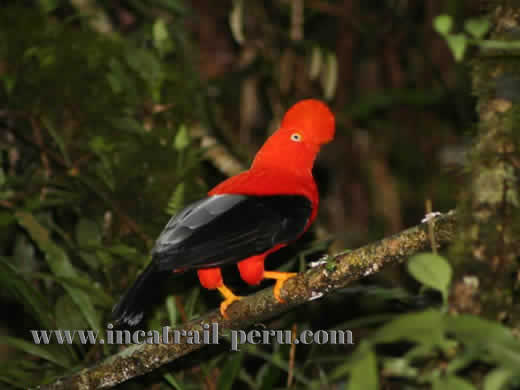 The male of this species has a tail three times the size of its body - making it a beautiful sight. Unfortunately, the plumage actually mingles with the forest environment, making it hard to see. They become active at dusk when they can be seen near the hot springs in Aguas Calientes. 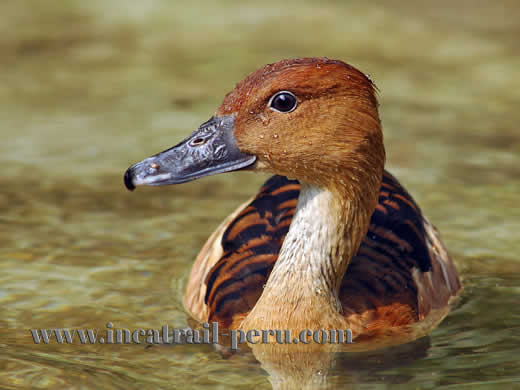 *Much of the information contained on this page comes from Del Sante, Cassinelli Gino (2003) Birds of Machu Picchu – 86 Most common species, Metrocolour: Lima. Illustrations by Daniel Huaman Chang.

If you even have an interest in birds, we highly recommend that you purchase this book which will enrich your trip to Machu Picchu or hike on the Inca Trail. 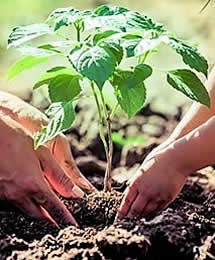