One of Peru’s nicknames is the Land of the Llamas. Who doesn’t love llamas? Llamas are representative of Peruvian culture and when you travel in Peru, you will have many opportunities to see and take photos of this lovely animal. One of those places is the Inca citadel Machu Picchu.

The fluffy and amusing llamas are known as serene, friendly and curious animals. Llamas express emotions through their enormous eyes and comical gestures. They are social and enjoy being in a group of their kind. They are known to engage with each other – which can be observed through playful behavior such as ‘hugging’ (with their necks) and ‘wrestling’.

When walking around Machu Picchu, you may be tempted to take many photos and Insta stories of the llamas that live there. Is taking a llama selfie a good idea? Yes, you can take selfies. Llamas are very photogenic. Just do it with caution. Llamas tolerate people to get close and observe them, however, do it with care. If llamas feel threatened, they might spit to defend themselves. Just make sure to handle them with love and patience; llamas are very social creatures and can make good pets.

Best time to see the llamas

Are you interested in enjoying Machu Picchu in the presence of these mysterious and cute animals? If so, we recommend you sleep in Aguas Calientes the day before your Machu Picchu Tour*. The best way to spend some time with the llamas is to enter the citadel as early as possible. Finding the llamas will be easy they will be wandering around and eating grass. Exact numbers are missing, but sources say that there are approximately 25 llamas living at Machu Picchu. The llamas belong to the Peruvian state. The llamas living at Machu Picchu are used to contact with foreign visitors. Sometimes it even seems that they’re posing with or for you!

*many alternative Machu Picchu Treks (such as the Salkantay Trek) end in Aguas Calientes; only the classic 4 day Inca Trail does not but if you hike the Inca Trail, you will also arrive early at Machu Picchu. 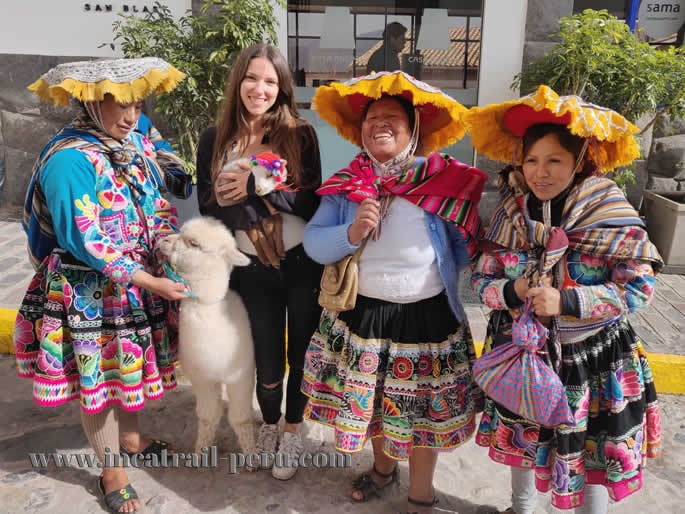 The llama in Inca time

Historically, the Incas domesticated llamas, as well as alpacas (relatives of llamas tamed for their soft wool) and guinea pigs. Llamas were crucial for the development of the Inca Empire. They were kept for their meat and fur. But the Incas also used the llamas as pack animals. Llamas can easily walk on mountainous ground and carry a quarter of their weight thanks to their thick leather soles.

Llamas were also frequently sacrificed for the Inca gods (especially during the Inti Raymi, one of the most important Inca ceremonies). Nonetheless, llamas were also very important for their dung (fertilizer).

Llamas (scientific name: Lama Glama) are herbivorous, domesticated mammals of the Camelidae family. Just like camels, they can survive on small amounts of water. Thanks to their extensive and prominent hair, that gives them their ‘fluffy’ look, they stay warm during the cold Andean nights. Llamas’ coats can be black, white, brown, or reddish. They have a lifespan of around 20 to 30 years and reach a length of approximately 160 cm.

Llamas in the altitude 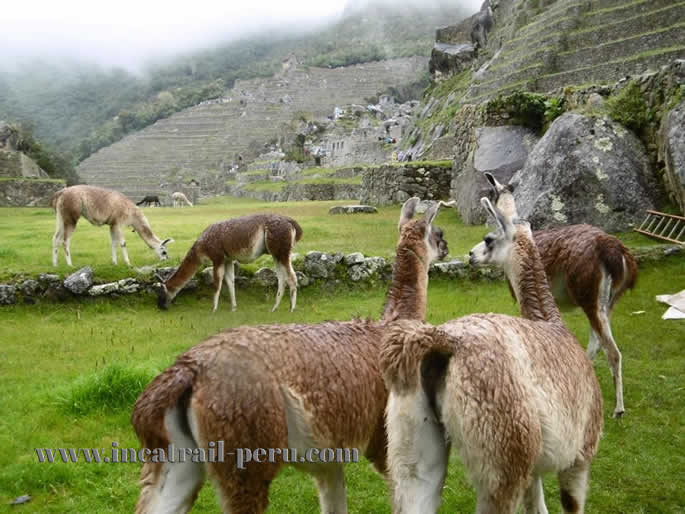 The high altitude of the Andes means that there is a low air pressure. However, llamas are able to live without any problem at these altitudes because of the high amount of hemoglobin in their blood. Thanks to the high levels of hemoglobin, they can absorb oxygen at the average height of 4000 meters above sea level.

Most of the camelids you will see at Machu Picchu are llamas. However, you may also encounter the related alpaca. Although similar, the main differences between llamas and alpacas can be seen between their ears, fur and size. The ears of the llama are long and curved, whereas those of the alpaca are short and straight. Furthermore, the llama is almost twice as big and heavy. Llamas weigh around 200 to 350 lbs. (90 to 158 kg), while Alpacas normally weigh 100 to 175 lbs. (45 to 68 kg).

Moreover, llamas have longer faces while those of the alpacas are hairy, which gives them their famous cute look. Another way to spot the difference between llamas and alpacas is by observing which animal is the fluffiest. Llamas have a harsh outer coat, while alpacas have soft, dense and fast growing hair. 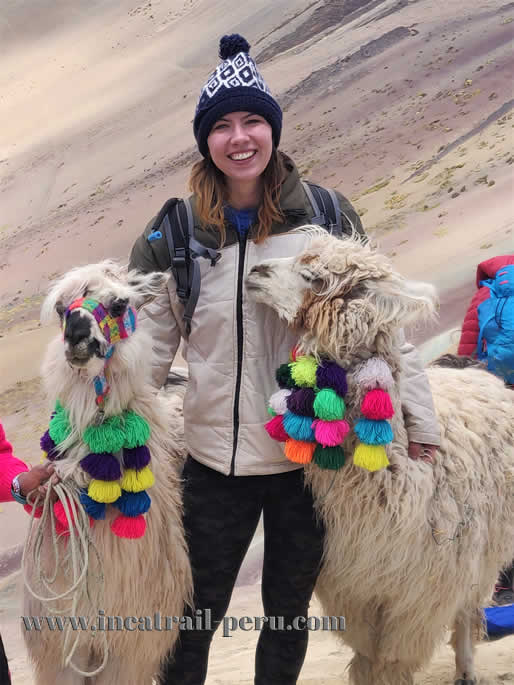 Although both species are social, llamas tend to be a bit more independent. This means that they are more likely to protect themselves. Both animals do spit but this rarely happens. If a llama or alpaca spits, it will be when they feel threatened. Llamas are more prone to spitting than alpacas. 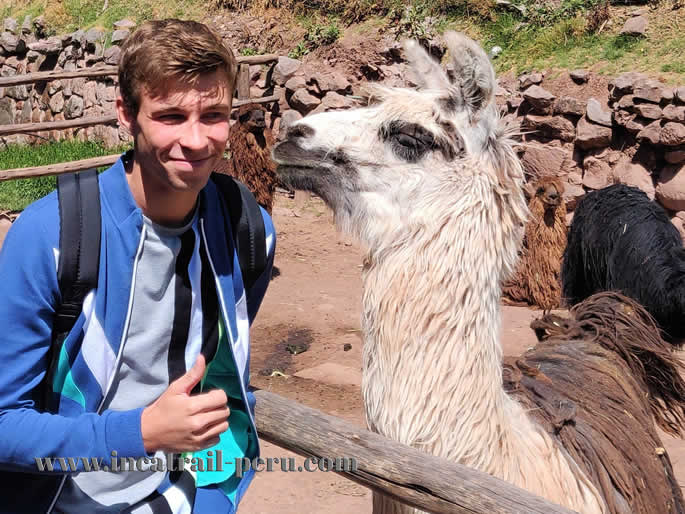 If you are lucky, you will encounter the wild ancestors of the llama and alpaca during your Peru trip! The two camelid species that live in the high Andes are the guanaco and vicuña. It is generally believed that the llama is the domesticated descendant of the guanaco, and that the alpaca is related to the vicuña.

The vicuña shares many characteristics with the alpaca: small, slender, weighs around 150 lbs. (68kg), measures around 80 cm (2 ft. 6 in.) at the shoulder and has small ears. Both species have a highly soft fleece. However, the vicuña produces this in a very low quantity of fleece: just one pound per year, approximately.

Although smaller, the guanaco shares characteristics with the llama: rough outer hair and a soft undercoat. Currently, both the guanaco and vicuña are endangered. Luckily, it is not allowed to hunt them anymore.

The Llamas of Machu Picchu

6 Do’s and Don’ts of Hiking in Peru