Machu Picchu What to Visit

There are many amazing sites to visit within the Inca Citadel Machu Picchu. A guide will take you to the most important places so you can marvel with the Inca Civilisation and learn why this is such an incredible site. There are some highlights you certainly do not want to miss.

The so-called urban sector in Machu Picchu was separated from the terraces or agricultural zone by a moat. One can note that some buildings were finished with smooth stone, fitting perfectly one to the other, while others have small irregular stones joints using a mud mortar, which was externally finished probably by plastering and painting.

We must take into account that there has not been much information about this city and that much of the information is based on the speculations of researchers, who generally use Bingham’s’ work as a base. Knowing this, we can analyse the architectural characteristics of the city and the buildings to understand a little about the mysteries of this city.

Several passages and paths connect the city, while hundreds of stairs permitted people to climb and descend the city that was constructed on a steep hill. Machu Picchu was built in the structure of a truncated pyramid that is a characteristic of the religious Inca architecture. It makes one think that Machu Picchu was a city dedicated to the religion and that it lodged a select group of nobles and priests who were dedicated to the adoration of the sun, the water and the mother earth. 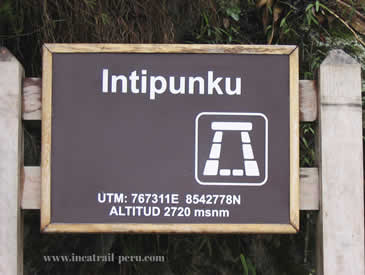 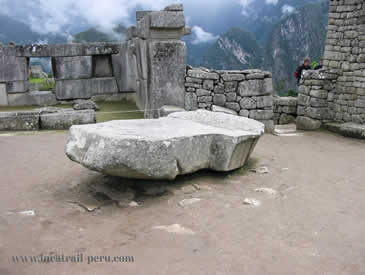 The Ceremonial centre is found inside the King’s Neighborhood (Barrio del Rey) - and is a type of enclosure with three sides called by the Incas “huayrana”. Researchers believe that this huayrana presided over the rituals and cults that were dedicated to water. In an agricultural society such as the Incas, water was vital to the sustainability of society. The water represented fertility, and therefore, life. When the Spanish arrived the chroniclers wrote that they were surprised by the cleanliness and neatness of the Inca nobles and of the daily baths that they took. Water was a sacred element to the Incas. Within this magic city, the Incas built 16 fountains and diverse subterranean and open canals that transported the water over the city. 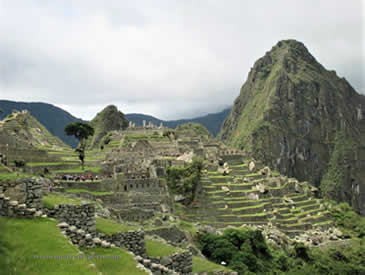 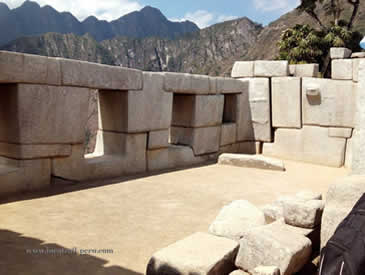 The Incas primarily extracted their material from quarries nearby and transported the grand blocks using many people. They were aided by thousands of small rocks that lubricated the path and served as wheels as the great blocks slid over them. In Machu Picchu, the quarry that provided material was alongside the Sacred Plaza, and there are still visible abandoned works, halfway through being cut.

Temple of the Sun

When Bingham found this very finely built semi-circular tower he immediately thought that it was similar in form to the Temple of the Sun (the Koricancha) in Cusco. That’s why he thought this also had to be also a temple dedicated to the sun. Aparantl y he was right: the two windows are aligned to the points where the sun rises in the mornings of the summer and winter solstices (the longest and shortest day of the year, respectively).

Apart from the identification of the solstices the Inca astrologists could also make decisions about the times of planting and harvest and also could warn about changes in seasons, and when to plant certain products. The observation of the sun was complemented by the observation of the sky in the nights, studying the constellations, whose appearances and disappearances also offered useful information for agriculture.

The Temple of the Sun was built on top of a great rock that was finely polished, and the Incas raised the walls following the contours of the original rock. Below the temple is cavern where tombs were found, named the Royal Tombs.

The royal tomb is located exactly below the tower of the Temple of the Sun. The Incas carved the rock that served as the base of the temple, and there they constructed a mausoleum that served as a tomb of an important person.

On the right side, in the external part, you can appreciate a rock carved with three steps (the symbol of the Pachamama). The rock was harmoniously united with the great rock that supports the Temple of the Sun, a characteristic of the Inca religious architecture. The internal walls of the grotto in the Royal Tomb are covered by stones that are perfectly joined, and in these walls, you see four trapezoidal niches, the size of doors.

It is also important to note that in the superior part of the walls, there are cylindrical stone nails that could have served as a support of funeral equipment or adornment of the tomb. Alternatively, they could have supported the beams for a roof. 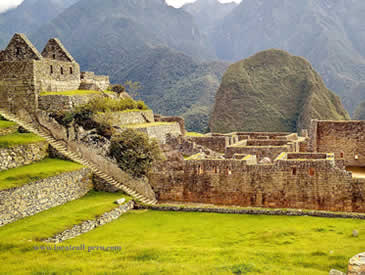 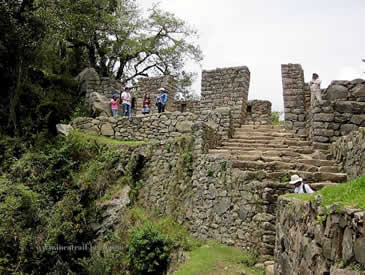 Palace of the Princess (Ñusta)

Some researchers think that this room was a special retreat of virgins that would be sacrificed to the sun or water or who took part in a religious ritual related to these deities. This idea is not so preposterous if you take into account its proximity to the Temple of the Sun and the connection between both buildings through the top window. In the Temple of the Sun exists a great table or altar that could have served for these sacrifices.

Hiram Bingham gave the name “Group of the King” to the buildings located in front of the stairs of the Ceremonial Centre, in the belief that here must have lived the highest dignitary of the city. The entry and exit are in the same place, providing high security and the interior of the buildings are of great architectural finish.

In the principal courtyard, you see a stone platform that elevates the floor, and it leads to a quite high wall with two beautiful trapezoidal niches. Probably this place was used to house ornaments or may be served as the dwelling of the mummy of a previous governor. Opposite the courtyard, on the south side there is a room that Bingham considered could have been the bedroom of the chief executive Inca. On the other side of the courtyard there is another room, bigger than the “bedroom”; Bingham considered this being the study room of the monarch. It possesses 12 beautiful niches.

Temple of the Three Windows

Located to the east side of the Sacred Plaza, it is imposing for the huge blocks of stone that were used, which were finely polished and perfectly fitted one into the other. The building is rectangular and only possesses three windows, leaving the side open to the plaza, where there are grouped a series of blocks, of which one seems to have served as a column. 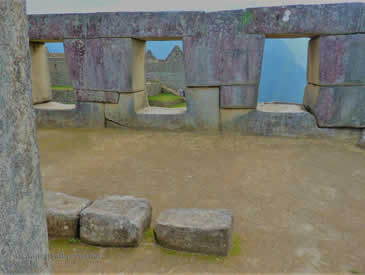 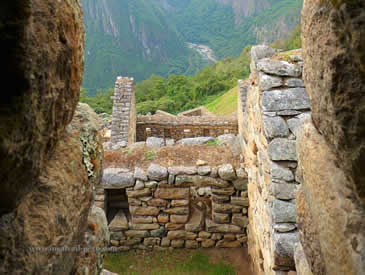 House of the Priest

This house is on the south side of the Plaza, and Bingham named it the “House of the Priest” thinking that from there the Supreme Priest would depart to direct the religious acts that would have had to take place in the plaza. This building is of less architectural quality, with two doors exiting onto the plaza and a series of niches in the interior.

This temple is located across from the Priest’s house and is of better architectural style. It has three walls, leaving the side to the plaza open. The stone blocks used in the building are big like those used in the Temple of the Three Windows and are also finely finished, as much in the assembling of the rocks as in the finish. In the back wall, there is a special stone altar, and the three walls possess trapezoidal niches of a very good finish. Sadly, seismic movement has affected the back wall that runs the risk of collapsing.

The Intihuatana is located above a pyramid constructed in the highest part of the urban sector of Machu Picchu. Its name means “where one ties the sun”, and this was precisely its objective: through religious rituals the Incas used to avoid the disappearance of the sun or to secure its return.

The Intihuatana had an important role in Inca belief: it was used in a ritual that had to secure the presence of the sun during the shortest day of the year (winter solstice) hence its common name, “the hitching post of the sun”. 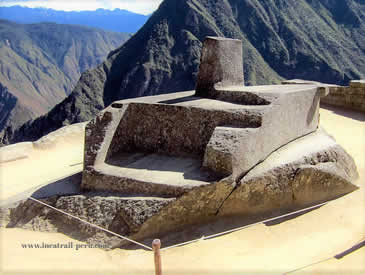 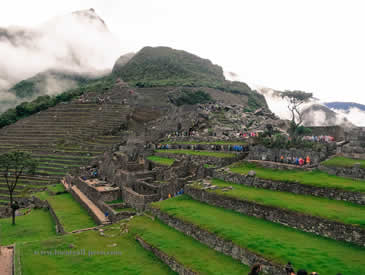 During many years this rock was considered to be a sundial, in the belief that the Incas used it to measure time. However, this appears to be incorrect in that it could not measure hours but could indicate the position of the sun in its extreme solstices and give useful information for agriculture in respect to the time to plant and harvest. This information was vital in an agricultural society. Within the Andean cosmology, the climate could be kind to them if one worshipped the gods appropriately. If they did not, they would be punished with droughts or floods, so that had to make animal or human sacrifices to calm the divine furies.

The astrological observation was advanced in the Inca times; we know that they could anticipate the eclipses; they knew the phases of the moon, that they knew the position of the stars, and that they believed in their own constellations.

The agricultural sector of Machu Picchu is located on the southern sector of the complex and forms terraces on both sides of the mountain. A path comes from the eastern side that connects with the Inti Punku and the Inca Trail. In this area several tombs were found; that’s why it’s called the superior cemetry. Within this cemetery you can see a huge lithic rock with some carved forms, known as the Funerary Rock. This rock has been polished and appears to have been a table of operations that probably served to embalm bodies of priests or important people, or maybe to make some ritual or sacrifice of humans or animals.

At the head of the agricultural sector, there is a small construction from where you can observe the accesses to the city from the south side; it called the Caretakers House. Also, on the eastern side of the sector, where visitors would have entered, you see a series of five houses, one in each level of the terraces. Bingham called these the Houses of the Guardians because they seem to control each of the most important accesses to the city.